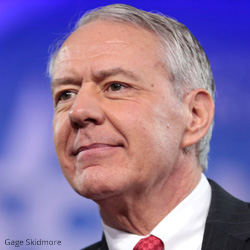 Ken Buck has been a Republican member of Congress since 2015, but his hawkish record on immigration predates his election to federal office. In 2004, after becoming District Attorney of Weld County, Colorado, one of his first official acts was to seize more than 5,000 files from a private tax service that he suspected was selling social security numbers to undocumented immigrants — a seizure the Colorado Supreme Court ultimately found unconstitutional.

A member of the Tea Party Caucus representing one of the most conservative congressional districts in Colorado, Buck has continued to assail undocumented immigrants as the top Republican on the House Subcommittee on Immigration and Citizenship. In February of 2020, along with Senator Marsha Blackburn, Buck introduced the Stop Greenlighting Driver Licenses for Illegal Immigrants Act, which would have withheld federal grants for states that “shield criminal immigrants from deportation” and give driver’s licenses to undocumented immigrants. Just three months later, he introduced the No Bailouts for Illegal Aliens Act, which sought to prohibit state and local governments from providing any cash assistance to undocumented immigrants during the Covid pandemic. Buck has co-sponsored legislation to take away federal funding from so-called sanctuary cities and supported President Trump’s use of a national emergency to gain funding for border wall construction.

While his immigration policy positions aligned with the Trump administration in the vast majority of cases, Buck did, on occasion, break with the former president. In July of 2019, after visiting a detention center at the southern border, he said, “As a person, it pains me to see individuals in this kind of crowded condition.” And in October of 2019, the congressman sent a letter to then-Secretary of State Mike Pompeo, urging the Trump administration to uphold “our nation’s longstanding commitment to assist refugees.” In a public statement released at the same time, Buck said, “As a Christian, I believe we should assist those who are forced to flee their homes, and as Americans, I believe we should do everything we can to assist these refugees around the world.”

When it comes to assisting undocumented people already in the U.S. however, Buck has been, as noted above, a strong opponent. In May 2020, Buck introduced a bill that would prohibit federal coronavirus relief money to any state or city unless it certified that no undocumented immigrants would be “targeted exclusively” to receive benefits. He said then, “With more than 40 million Americans out of work, it is unfair to send hard-earned taxpayer dollars to non-citizens who entered this country illegally. We need to prioritize the American people by making sure taxpayers are not subsidizing blue states’ plans to give cash payments to ‘illegal’ immigrants.”