Americans tend to think of immigration as one issue but really it’s a big arena with many different issues being debated at once. Building Ideaspace required us to parse these issues. After researching 30 leading Key Players from both sides of the aisle and distilling 34 Themes from their policy positions, we want to share with you our observations about the state of the immigration policy debate in the United States.

Though our highest goal is to find places of consensus, we are forced to acknowledge there is a gorilla in the immigration policy room: intense polarization. The presence of such polarization on this issue is not news, but our research does illustrate its intensity. When we distilled Themes from the thoughts of our balanced array of Key Players, we found that support for each Theme was often made up almost entirely of Players from one side of the aisle. Bipartisan support was scarce.

The chart below emerges when we graph for every Theme the minority support of that Theme measured against its majority support. To gauge the relationship between the two sides of support, we divided the number of Key Players on the minority side by the number of Key Players on the majority side to get first a fraction and then a ratio. For instance: five Democratic supporters divided by 16 Republican supporters of a Theme equals 5/16, which can then be expressed as a ratio — in this case, .31. This ratio expresses the relationship between the size of the minority and the size of the majority.

After calculating this measure of bipartisan support for all the Themes, we displayed the resulting ratios in a bar chart with the Themes ranked in descending order from largest ratio to smallest. If the minority position was made up of Key Players on the left side of the political spectrum, we used blue for the bar; if the minority support came from the right side, we used red for the bar. 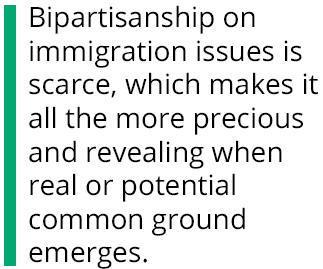 Bipartisanship on immigration issues is scarce, which makes it all the more precious and revealing when real or potential common ground emerges. Relatively broad bipartisan support for a Theme can mean it has struck a chord that resonates well across the entire spectrum — a solid foundation on which to build wider support. Narrow bipartisan support (a small group of Key Players on the minority side) may mean the position is precarious, but it can also signal untapped potential to expand consensus beyond an initial beachhead of minority support. We found both types of bipartisanship as we examined our 12 Themes that drew support from both left and right.

No Theme has broader support across the political spectrum than the push to secure the border. From former President Donald Trump on the far-right to Cory Booker on the left, many in the immigration debate have articulated a vision of our borders — the southern border, in particular — as a security zone that should be monitored to prevent people and products from crossing illegally into the country. While some on the left might express support for the open borders policy that was in place for the first century of our country’s history, our analysis shows definitive support across the political spectrum for strong border security measures.

That said, border security is defined very differently by different people. For example, many on the left disagree with former President Trump’s emphasis on building barriers and there is bipartisan push-back on the idea of using military funds or emergency powers to round up more funding for such barriers.

At the same time, we found bipartisan awareness of the large undocumented population in our country — at least 11 million people — and recognition that it’s not practical to remove all of them from the country. This has been underscored by the first piece of legislation proposed by President Joe Biden: a roadmap for allowing undocumented immigrants to gain legal status over an 8-year-period. In particular for those who have led law-abiding lives in the country and DACA enrollees who were brought to the country as children, there is a long history of efforts to find good legislative solutions. Because many of these individuals have been gainfully employed and contributing to American communities, there are elements of bipartisan support for finding a way to let them continue to do so with legal status.

It’s important to note that legal status is different from a pathway to citizenship. Perhaps most importantly, it stops short of conferring the political power of the right to vote. Legal status for portions of the law-abiding undocumented population can be accomplished through various avenues, including worker visas and, for those whose home countries are too unsafe for a return in the immediate future, Temporary Protected Status.

Taxing our country’s infrastructure and testing our nation’s capacity to provide social services are real concerns in our nation’s immigration policy debate. There is little appetite for bringing undocumented migrants into the social safety net with benefits like Social Security and government-sponsored health care. By contrast, there is a discernible element of bipartisan support for trying to pre-empt the need for some migrants to seek asylum in the U.S. This support takes the form of interest in re-starting major development aid to Central America and establishing regional processing centers in Central American countries. Not only do such centers afford migrants the opportunity to apply for asylum closer to home but they also help identify alternative asylum destinations in the region — more stable countries where migrants can live and work using their first language.

Even with enduring questions about how many new immigrants our country can handle on an annual basis, there is some bipartisan support for increasing the number of asylum seekers who are granted entry and finding effective ways to incorporate immigrants into the workforce. 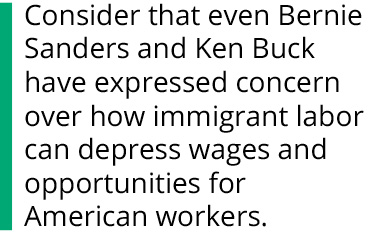 Perhaps the workforce perspective holds the most promise for building bipartisan consensus. Consider that even Bernie Sanders and Ken Buck have expressed concern over how immigrant labor can depress wages and opportunities for American workers. Immigrant labor as a depressant of demand for American labor has intuitive appeal, but the counterintuitive position has its advocates. Giovanni Peri, for instance, examines the underpinnings of urban economic vitality and argues that immigrant labor can be neutral or positive for the resident U.S. workforce. There are many ideas about how to protect our country’s workers in a globalized labor market while still turning to immigrants to help meet American workforce needs, including the possibility of developing a point-based system to assist in making decisions on legal immigration.

We can see in this pattern of Thematic support a broad-based foundational desire in the United States to build, fairly reward, and care for the workforce we need. This desire is tempered by awareness that the number of new workers who can be welcomed into the country must match up well with the accommodative capacity of our physical and social infrastructure. A focus on how best to meet our workforce needs seems to be the most promising way to build a bipartisan consensus on how to improve U.S. immigration policy.