Thank you for caring enough about public policy to come this far into the Ideaspace adventure. Please join me for these ruminations on consensus.

Consensus is the lifeblood of democracy. Circles of consensus of varying size are all essential to the differently scaled political actions they support in a democracy. Consensus is a precursor and a prod to action, and action changes the setting in which a new consensus takes shape. This spiral of consensus and action lasts as long as the democracy which it animates.

Consensus is almost never unanimity. It is an extract of diverse opinions and feelings. It is a circle of like-mindedness with blurred boundaries. On the outside consensus faces opposition that can intensify to hostility, even physical attack; on the inside it depends on a mélange of allegiances, some firm, some squishy. Ordinary public squabbling and partisanship may obscure the role of consensus, but they cannot hide the fundamental truth that, in a democracy, reasonably broad social agreement is plainly a prerequisite to significant exercise of the law-making power.

Consensus in any political setting is layered, complex, riddled with discontinuities and mysteries — sometimes internally contradictory. This is hardly surprising since political consensus is a heady stew of individual and group beliefs and the beliefs are commonly framed in rhetorically charged and highly subjective language. Data on such consensus must be simplified to be politically useful. There are many tools for doing so, elections being the most definitive. Between elections our tool of choice is incessant polling. 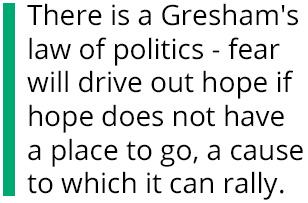 Ideaspace is a new web-based tool for simplifying our view of political consensus. It is a methodology for examining any political topic in a way that is distinctively inductive; that is, it builds up from facts on the ground to theories that are brought to life — are induced into being — to make sense of the facts. It moves from specific evidence to one or more general principles.

In Ideaspace the raw materials are the thoughts of an array of people who are actively participating in public discussion on the chosen topic. The website presents their thoughts and themes distilled from those thoughts in a way that shows where consensus is emerging, especially bipartisan consensus, the most precious and actionable kind. In this exercise finding neutral phrasing for the themes is a challenge when even ordinary terms can be weaponized as code words that carry an intense but veiled message. At every step Ideaspace strives to respect the power of language.

Ideaspace is a tool to be used carefully and dispassionately. It will show you not just what you want to see, but what you don’t want to see. A tactic you reject may be the most direct path to a strategic objective you accept. Ideaspace brings a lens to bear on both reality and aspiration. It will show you where a consensus is today and where it may be going.

Analysis of any political issue forces awareness of political imperatives — broad forces that can move a political system toward consensus or confrontation. The stakes grow high in angry, divisive times like those we are living through, when there are clear losers and winners and the losers do not like what is happening to them. If we, as active participants in American democracy, do not gain skill in articulating common objectives that reach equitably and deeply into our society, the forces that erupt around us are likely to be harsh and defensive, grounded in fear. There is a Gresham’s law of politics — fear will drive out hope if hope does not have a place to go, a cause to which it can rally.

To find a destination for hope — or for appropriate fear — on any public issue is to confront the fundamental challenge of all government: given limited knowledge and embedded power, what is the optimal path forward? What path that lies within our reach will yield the optimal mix of benefits attained for costs incurred? Economic analysis of any policy issue is a good place to begin when looking for attainable objectives because every system has to make its peace with money — how it flows in and how it flows out. 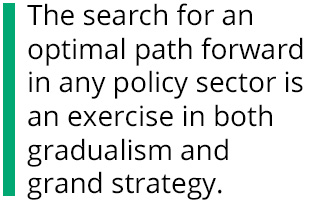 Money may be a good place to begin our inquiry, but optimization in the public realm requires questions framed explicitly in political terms. We need to know what political resources are available now and what attainable deployment of them would maximize return. Attainability is directly dependent on a supporting consensus, either in existence or within reach. The practical goal becomes incremental improvement through the construction of a new consensus that builds on an existing one. Such a gradualist strategy makes full use of this reality: We have to agree on what we are going to do, but we do not have to agree on why we are doing it. Shared action does not require shared motive.

Motive does, however, matter. A fundamental task of consensus-building is a probing of the values that shape motive. This task is so difficult that it should be imposed first on ourselves. Only when we feel we have explored the labyrinth of our own values are we ready to take on the equally crucial but more difficult work of searching for the origins of motive on the other side of the partisan divide. Understanding a different psyche helps bring bargaining within reach.

An elegant gradualist tactic is to look across the partisan divide and identify the most cogent major element in your opponent’s argument, then seek to draw your own supporters into an intense encounter with just that one element. Both sides can marshal evidence and interpretation not on everything, but on one thing. A focused field of engagement may reveal where a new point of consensus is attainable.

The search for an optimal course forward in any policy sector is an exercise in both gradualism and grand strategy. It must explore pragmatic realities and attainable objectives, but also take account of what the strategic eye can see from well above the fray. Even as we study near-term pragmatics, we should aspire to climb to a height where distant opportunities for constructive, collaborative action can be seen, perhaps not for today but for the day when, led by those with a long view, a supporting coalition can be constructed.

Any such long-term plan of action needs a deep understanding of the history and system dynamics that bear on the plan and a vision that can stir people to consensus and action within a tolerable span of time.

The road to progress in a democracy is long and winding but well-traveled. The journey can last a lifetime. The rewards of the journey are the ideas and friends you meet and the possibility of making the world a better place. A grasp of consensus and how it grows will make you a more potent participant in any democracy that you inhabit.