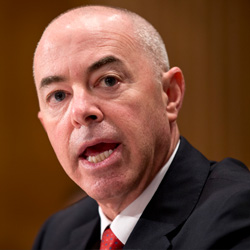 Alejandro Mayorkas is the first Latino and the first immigrant to serve as Secretary of Homeland Security. His nomination falls in line with President Biden’s stated intent to make immigration policy reform a priority in his administration.

As the son of Cuban refugees, Mayorkas brings a deep personal connection to his role. He responded to his nomination on Twitter by writing, “When I was very young, the United States provided my family and me a place of refuge. Now, I have been nominated to be the DHS Secretary and oversee the protection of all Americans and those who flee persecution in search of a better life for themselves and their loved ones.”

As the Director of U.S. Citizenship and Immigration Services (USCIS) under the Obama administration, Mayorkas was integral to the development and implementation of DACA. He has spoken publicly about the need to codify protection for undocumented immigrants through legislation, such as the DREAM Act, and supports expanding DACA’s protections to more individuals.

As Secretary of Homeland Security, Mayorkas is likely to attempt to strike a balance between a welcoming and humanitarian immigration policy and by-the-books immigration enforcement. At a Migration Policy Institute conference in 2016, he addressed criticisms that the Obama administration’s deportation of Latin American migrants who had not qualified for refugee status was inhumane, saying, “We are a nation of immigrants and we are a nation of laws.”