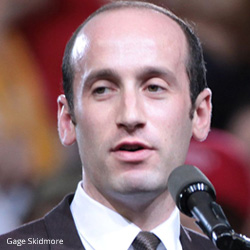 Outside of former President Trump’s own family members, Stephen Miller remained one of the more constant figures in the Trump universe, joining the Trump campaign before the 2016 Iowa caucuses and serving as White House senior policy adviser for the entirety of Trump’s term in office. The lead architect of many of Trump’s immigration policies, Miller’s resilience in the administration was testament to Trump’s commitment to an extremely hawkish immigration policy.

The Breitbart emails, released in 2019, were never disputed by the White House, where Miller continued to play a leading role in Trump’s immigration policy, including the travel ban for people from Muslim-majority countries, reducing the annual cap on refugees accepted into the country from 110,000 to 18,000, and the “zero tolerance” border security policy, which separated children from parents and mandated detention for everyone caught crossing the border illegally.

Though Miller remained central to Trump’s presidential decision-making, administration officials regularly leaked unflattering stories about Miller to the press, including allegations that he blocked the publication of internal Trump administration studies that showed refugees had a net positive effect on the national economy, and that Miller once told a White House colleague that he “would be happy if not a single refugee foot ever again touched America’s soil.”

Since leaving the White House, Miller hasn’t slowed down. He has given numerous interviews, briefed GOP lawmakers on how to oppose Biden’s proposed immigration policies, and formed a new legal group, America First Legal, which has already joined with Texas Attorney General Ken Paxton to file a federal lawsuit aimed at preventing the Biden administration from allowing any migrants on the southern border to enter the U.S. Those vying to carry Trumpism into the 2024 Republican presidential primary will likely consider making Miller a core part of their team.