President and Founder of NumbersUSA 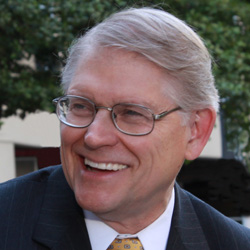 Roy Beck is the president and founder of NumbersUSA, a think tank and grassroots organization that advocates for reduced immigration on the argument that recent numerical levels depress wages and job opportunities for American workers. Beck advocates through NumbersUSA for the reduction of legal immigration from the average that has prevailed since 1990 of roughly 1 million to a number between 550,000 and 600,000.

Trained as a journalist at the University of Missouri, Beck spent two decades in newspapers focusing on environmental issues, religion, and public policy. In 1990, he pivoted from covering Congress to writing about immigration issues for journals and magazines before ultimately transitioning to advocacy work. In 1996 he founded NumbersUSA with funding raised through an umbrella organization run by John Tanton, who was then a leader in the formation of the country’s modern immigration reduction movement and a defender of European-American ethnicity as the defining characteristic of the United States. During the same period, Beck edited Tanton’s 1994 book, The Immigrant Invasion: How Third World Immigration is Destroying the First World and What Must be Done to Stop It, and served as an editor for The Social Contract, a quarterly founded by Tanton.

In a 1994 article published by The Atlantic, Beck described an idyllic European-centric social order in Wausau, Wisconsin, being frayed by a rapid increase in the number of Hmong immigrants from Southeast Asia. He wrote that the U.S. had not made a bold reduction in immigration since a 1924 law substantially reduced immigration and gave priority to western-European immigrants. Beck ruminated that returning to the country’s immigration-reduction policies of the 1920s could help bring about “a recoverable paradise” and “social healing” for places like Wausau.

Despite their collaboration and shared ideas, Beck emphasizes that NumbersUSA has been independent of Tanton since 2002, and the organization’s website includes a forceful statement from Beck against immigrant bashing, admonishing the public not to blame immigrants but rather Congress for current immigration problems. The site prominently displays a picture of the late Barbara Jordan — the civil rights leader and Democratic congresswoman from Texas — and asserts its support for the recommendations of the U.S. Commission on Immigration Reform which she chaired.

NumbersUSA was at odds with the George W. Bush and Barack Obama administrations and became marginalized, but remained influential behind the scenes. In 2007, when Congress was considering immigration reform legislation that would have provided legal status and a pathway to citizenship for millions of immigrants, NumbersUSA flooded lawmakers’ offices with talking points and reasons for voting against the bill, which ultimately did not make it to a vote. The organization waged a similarly successful behind-the-scenes effort in 2010 against the DREAM Act and, in 2013 and 2014, against the so-called Gang of Eight legalization and immigration expansion bill.

Reflecting on these successful efforts in a 2014 profile in The New York Times, Beck remarked, “We did as much as possible to make immigration radioactive in as many places as possible.” NumbersUSA claims more than 8 million supporters in its online grassroots network, with Facebook showing NumbersUSA with the largest fan base of any single-issue advocacy group.

With Trump’s election, Beck found an open embrace in Washington. “We’ve been in the wilderness,” Beck told The Washington Post, “and overnight we are not anymore.”