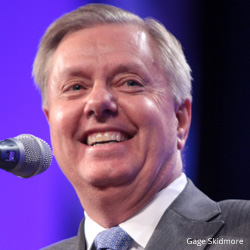 During the Trump presidency, Lindsey Graham was one of Trump’s strongest supporters, but the Republican U.S. senator from South Carolina has largely remained steadfast in his diverging views on immigration reform, which include a willingness to consider a pathway to citizenship for law-abiding undocumented immigrants and his belief that immigrants play an important role in the American workforce.

“We’re gonna have a shortage of workers over time,” said Graham in a 2015 Republican presidential primary debate. “As to the 11 million [illegal immigrants here now], I want to talk about fixing the problem. We’re not going to deport 11 million people and their legal citizen children.”

A longtime friend of Trump critic John McCain, Graham was slow to warm to former President Trump. But now he has even modified some of his views on immigration reform to better align with Trump: Graham now predicates any possible immigration reform on stronger border security, and while he has expressed sorrow regarding immigrants who have died migrating to the U.S., he stresses that anyone who crosses into the country illegally should face stiff penalties. In July of 2019, shortly after visiting two immigrant detention facilities in Texas, Graham told Fox News that, “I don’t care if they have to stay in these facilities for 400 days.”