Former President of the United States 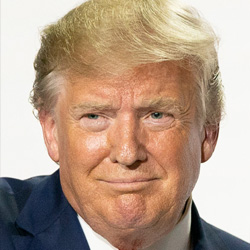 Donald J. Trump, the longtime New York City real estate mogul and television personality, has been in the public eye since the 1970s, and has flirted with presidential campaigns as far back as 1988. But the political rise that ultimately landed him in the White House began in 2011, when, amid polls showing him leading a hypothetical 2012 Republican primary field, Trump began repeatedly demanding that President Barack Obama produce his birth certificate. Trump didn’t run for president in 2012, but his frequent appearances on Fox News at the time positioned the then-reality TV star as the de facto leader of the birther movement, which alleged that Obama was born in Kenya and was therefore an illegitimate president.

By the time he descended the escalator in Trump Tower in June of 2015 and declared himself a candidate for president, Trump had, through birtherism, formed a growing base of Republicans who were as disaffected by the Democratic Party as they were by the establishment leaders of their own party. From birtherism, it was a natural leap to declaring himself the most hawkish candidate on immigration in the 2016 Republican primary field.

But Trump persisted in his nativist rhetoric. “Build the Wall” became the central theme of his campaign. Upon winning the presidency, Trump and his team of far-right immigration hawks — including Jeff Sessions, Stephen Miller, and Steve Bannon — felt they had a clear mandate to implement hardline immigration policy, including: a ban on all immigration from Muslim-majority countries, reallocation of Defense Department funds and government shutdowns in service of building a wall on the southern border, separating immigrant parents from their children at the border, carrying out high-profile deportations of longstanding residents, and reducing the annual number of refugees accepted into the U.S. by nearly 100,000. While the Biden administration has already repealed many of Trump’s landmark executive actions, hundreds of lesser-known policies remain on the books.