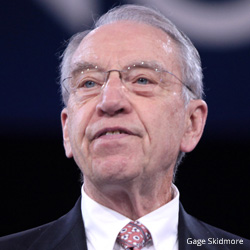 In the Trump era, Grassley was a point-man for the Trump administration in the Senate. In February 2018, he introduced the Secure and Succeed Act, which would have provided the president with $25 billion for border security, including construction of barriers, in exchange for a pathway to citizenship for 1.8 million DACA enrollees, provided they either serve in the military or obtain a college or vocational degree and maintain employment. Grassley said this represented “a major concession for many Republicans, including me, but this concession is necessary to provide a permanent and fair solution to this issue.”

Without equivalent concessions from Democrats, Grassley has dismissed any chance of cooperating on comprehensive immigration reform. When President Biden released the first details of his proposed immigration reform bill, Grassley said, “A mass amnesty with no safeguards and no strings attached is a nonstarter.”

Beyond his work on guest-worker visas and DACA, Grassley was a strong supporter of the controversial enforcement and removal operations conducted by ICE under the Trump administration and has advocated for an increase in the size of the agency, including “increasing agents in states like Iowa.”