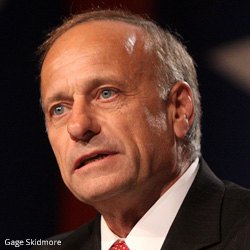 In a Republican Party that has moved far right on immigration policy under President Trump, Steve King remains a hawk among hawks. For much of his political career, King — a U.S. congressman representing Iowa since 2003 — has been an unabashed opponent of illegal and legal immigration, arguing for the U.S. to remain a European-centric society. As early as 2002, while he was still serving in the Iowa State Senate, King put forward a bill requiring schools to teach that the United States “is the unchallenged greatest nation in the world and that it has derived its strength from . . . Christianity, free enterprise capitalism and Western civilization.” He also helped pass legislation to make English the official language of Iowa and sued the state’s attorney general for making information available in languages other than English. He often speaks about “the Great Replacement,” a conspiracy theory that claims shadowy elites are working covertly to reduce white populations.

King’s long-standing views on immigration helped pave the way for many of the policy positions of the Trump administration. In a 2006 rally in Las Vegas, King called the deaths of Americans at the hands of undocumented immigrants a “slow-motion Holocaust.” At the same rally, he falsely claimed that undocumented immigrants kill 25 Americans every day, which later became a talking point for President Trump.

In 2011, King introduced the Birthright Citizenship Act “to limit birthright citizenship to a child born in the United States to at least one parent who is a U.S. citizen or national, a legal permanent resident living in the United States, or an individual who is serving on active duty status in the U.S. Armed Forces.”

Early in Trump’s term, King visited the Oval Office, and when the president mentioned the fundraising he had done for the congressman, King replied, “I market-tested your immigration policy for 14 years, and that ought to be worth something.”

Though King enjoyed a good relationship with President Trump until recently, the congressman was ostracized by Republican Party leadership in 2019 after incendiary remarks he made during a New York Times interview. Mr. King was quoted as saying, “White nationalist, white supremacist, Western civilization — how did that language become offensive?” Shortly thereafter King was stripped of his House committee assignments, and in June 2020 he lost his Republican primary to a candidate whom many saw as the favorite of the national party