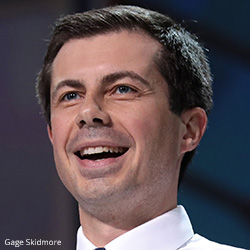 Pete Buttigieg is the 38-year-old former mayor of South Bend, Indiana, and the first openly gay person to run for president of the United States. Though Buttigieg’s identity imbued his campaign with the promise of generational change, the Harvard alum and Rhodes scholar relied heavily on his Midwestern roots, his military deployment to Afghanistan, and centrist policy ideas to appeal to the moderate wing of the Democratic Party.

Having held no public office higher than mayor of South Bend (2012– 2019), Buttigieg does not have a deep record on immigration. However, during his campaign for president, he regularly invoked his father, an immigrant from Malta, and his support of the undocumented immigrant community in South Bend.

As mayor, he implemented a first-of-its-kind municipal identification card system for undocumented immigrants, enabling residents to access such basic services as schools, banks, and drugstores. And he often underscores the positive influence the Latino community has had on South Bend’s economic development, saying that Latinos are “a key part of the economic engine for our country.”

As a presidential candidate, though Buttigieg was in lock-step with progressive Democrats in calling President Trump’s immigration policy “racist,” he delighted moderates and conservatives alike by calling for “reasonable measures on border security.”