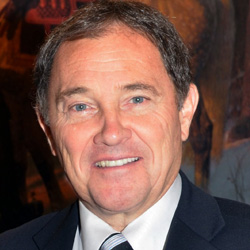 Gary Herbert is one of the rare leaders in today’s GOP who has voiced opposition to President Trump, especially on matters of immigration policy.

The Republican governor of Utah, a sparsely populated state, Herbert has long viewed immigration as a key to economic growth, but his support of refugees is more the result of his identity as a Mormon, a religious group accounting for more than 60 percent of Utahns. In 2019, in response to a presidential executive order limiting refugees obtaining asylum in the U.S. to 18,000 annually (down from Obama era numbers reaching 110,000), Herbert wrote a letter to President Trump asking for the number of refugees resettling in Utah to rise, largely on religious grounds.

“Our state was founded by religious refugees fleeing persecution in the eastern United States,” wrote Governor Herbert in a letter dated October 24, 2019. “Those experiences and hardships of our pioneer ancestors 170 years ago are still fresh in the mind of many Utahns. As a result, we empathize deeply with individuals and groups who have been forced from their homes and we love giving them a new home and a new life.”

Herbert was born and raised in Utah, served a two-year mission with the Church of Jesus Christ of Latter-Day Saints, and attended Brigham Young University. He began his political career in 1990, at the age of 42, as a commissioner on the Utah County Commission. He served in that role for 14 years until 2004 when he decided to run for governor. That year he ended up signing on as the running mate of Jon Huntsman, Jr., and became the lieutenant governor after a successful campaign.

In 2009, when Huntsman became the U.S. Ambassador to Russia, Herbert ascended to the governorship. He remains the governor today after a successful special election in 2010, following which he was re-elected in 2012 and 2016. He has declined to run for a third term, with Huntsman, his old boss, seeking to retake the office.

In addition to his actions on asylum policy, Herbert was a prominent critic of Trump’s decision to shut down the federal government over border wall funding, writing in an Op-Ed in January 2019 that certain powers should be returned to the states to mitigate the effects of shutdowns, which, according to Herbert, “represent a special kind of dysfunction that simply doesn’t happen at the state level.”

The governor has also been a vocal opponent of family separation, tweeting in July of 2018: “It is inhumane to forcefully and unnecessarily separate children from their parents. Let’s get past the blaming and shaming, halt this cruel policy, and find common sense federal legislative solutions.”